From ‘covidiots’ to ‘quarantine and chill’, the pandemic has led to many terms that help people laugh and commiserate.T

Throughout history, challenging circumstances have given rise to new ways of expressing those challenges. George Eliot, the 19th Century writer who was famously frustrated by rigid gender and lifestyle norms, is credited with the first recorded use of the word ‘frustrating’. More recently, Brexit led to a flowering of new words, including the inevitable ‘Bremain’ and ‘Bregret’, and a repurposing of existing words, such as ‘backstop’.

While Brexit may be the closest parallel, the speed of the linguistic change we’re seeing with Covid-19 is unprecedented, says Robert Lawson, a sociolinguist at Birmingham City University. Lawson attributes this to multiple factors: the dizzying pace at which the virus has spread, its dominance in the media and global interconnectivity at a time when social media and remote contact are so important.

Many of the newly popular terms relate to the socially distanced nature of human contact these days, such as ‘virtual happy hour’, ‘covideo party’ and ‘quarantine and chill’. Many use ‘corona’ as a prefix, whether Polish speakers convert ‘coronavirus’ into a verb or English speakers wonder how ‘coronababies’ (the children born or conceived during the pandemic) will fare. And, of course, there are abbreviations, like the ubiquitous ‘WFH’ and the life-saving ‘PPE’.

Old words in a new light

Like everyone else, lexicologists are scrambling to keep up with the changes the pandemic has wrought. According to Fiona McPherson, the senior editor of the Oxford English Dictionary (OED), back in December ‘coronavirus’ appeared only 0.03 times per million tokens (tokens are the smallest units of language collected and tracked in the OED corpus). The term ‘Covid-19’ was only coined in February, when the WHO announced the official name of the virus. But in April, the figures for both ‘Covid-19’ and ‘coronavirus’ had skyrocketed to about 1,750 per million tokens (suggesting that the two terms are now being used at roughly the same frequency). 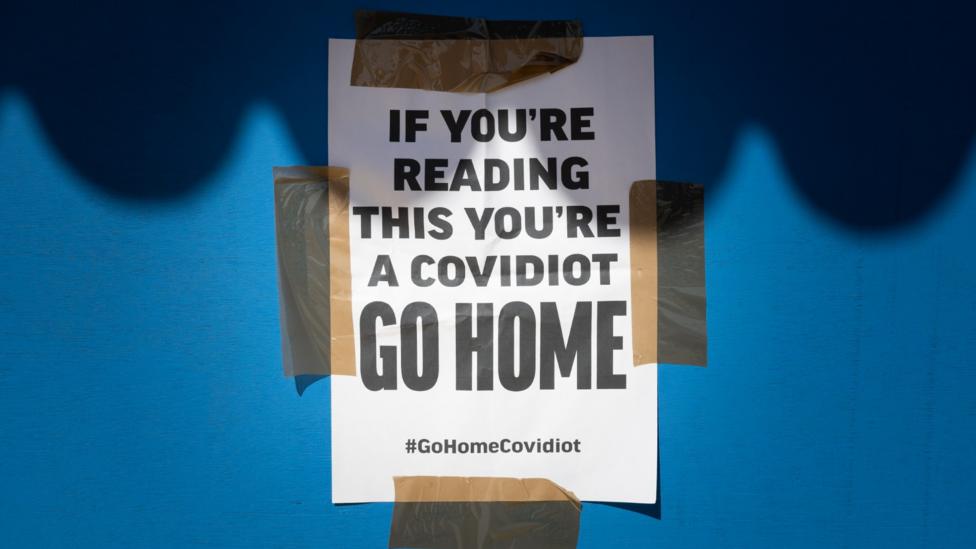 Innovative signs: In the UK, ‘covidiots’ is being used to described those ignoring social distancing rules

All of the terms added to the OED in April, in an unscheduled update, were related to the pandemic in some way, including ‘infodemic’ and ‘elbow bump’. But McPherson notes that the only actual new word added to the dictionary is ‘Covid-19’. The others are pre-existing terms that have gained new resonance at a time when many people are subject to a ‘stay-at-home order’ (US), ‘movement control order’ (Malaysia) or ‘enhanced community quarantine’ (Philippines).

“Although a lot of the words we’re using just now and a lot of the terminology is actually older, a lot of it seems fairly new. ‘Coronavirus’ itself goes back to the 1960s,” she points out.

What McPherson calls the “nuancing of already existing words” can in some cases be subtly harmful. War metaphors invoking ‘battles’ and ‘front-lines’ are being widely applied to the pandemic, yet thinking only in terms of a wartime emergency can detract from longer-term structural changes needed. This has given rise to the project #ReframeCovid, in which linguists collect crowdsourced examples of alternatives to war language.

Inés Olza, a linguist at the University of Navarra in Spain, says she started the project spontaneously on Twitter. She understands the temptation to invoke war metaphors, especially at the start of the pandemic when they were necessary to build unity and mobilise swiftly. But “a sustained use of that metaphor and abuse of it, and the lack of alternative frames, might generate anxiety and might distort things about the pandemic”, she believes.

As well, terms such as ‘natural disaster’ and ‘perfect storm’ can create the impression that the pandemic was inevitable and unavoidable, neglecting the political, economic and environmental contexts that make certain people more exposed. Some healthcare workers have expressed their frustration at being called ‘heroes’, rather than seen as complex, frightened individuals doing a job, who need protective equipment and policy rather than relying on their own sacrifices. 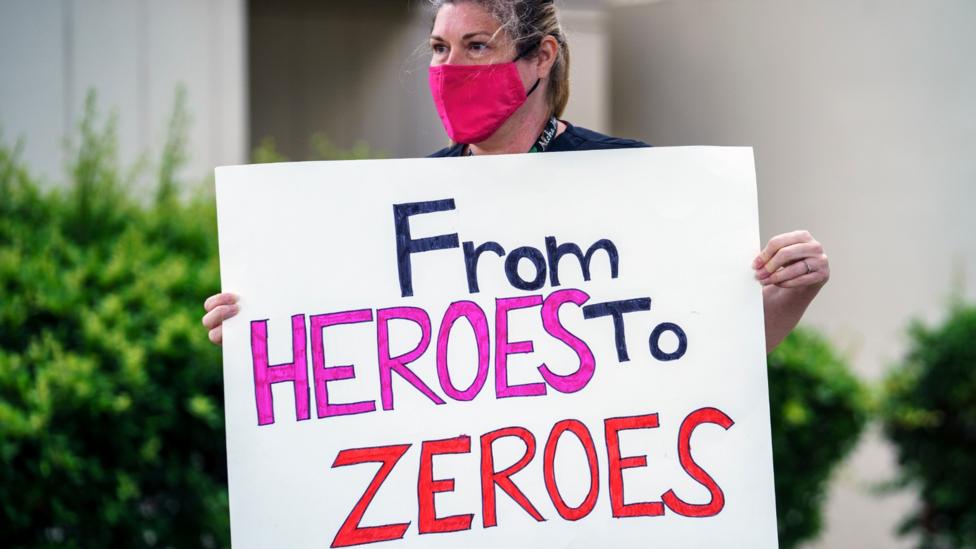 In some cases the language being used isn’t appreciated: this US healthcare worker is protesting against a lack of PPE

Overall, there’s a wealth of linguistic creativity that hasn’t yet entered the dictionary, but reflects the role of novel language as a coping mechanism. These innovative usages, Lawson says, “allow us to name whatever it is that’s going on in the world. And once you can name the practices, the events, the social conditions around a particular event, it just gives people a shared vocabulary that they can all use as a bit of a shorthand. I think ultimately if you can name it, you can talk about it; and if you can talk about it, then it can help people cope and get a handle on really difficult situations”.

Writer Karen Russell has found the newly ubiquitous term ‘flatten the curve’ to be reassuring – a reminder of the importance of both individual and collective action, which “alchemizes fear into action”. And both the practice and the terminology of ‘caremongering’, used for instance in Canadian and Indian English, allow for an alternative to scaremongering.

Beyond earnest words like these, a kind of slightly anxious humour is central to many of the ‘coronacoinages’. The German ‘coronaspeck’, like the English ‘Covid 19’, playfully refers to stress eating amid stay-at-home orders. The Spanish ‘covidiota’ and ‘coronaburro’ (a play on ‘burro’, the word for donkey) poke fun at the people disregarding public health advice. ‘Doomscrolling’ describes the hypnotic state of endlessly reading grim internet news. Lawson’s favourite, ‘Blursday’, captures the weakening sense of time when so many days bleed into each other.

I don’t think that by having a little bit of light in the dark, people are making light of the situation – Fiona McPherson

Australian English, no stranger to light-hearted abbreviations, has produced ‘quaz’ for ‘quarantine’ and ‘sanny’ for ‘sanitiser’. Queer and black communities, so often a wellspring of linguistic innovation, have given rise to ‘Miss Rona’ as a slang term for the virus. And for the unsayable, there are always emojis. The folded hands emoji, the medical mask emoji, and the microbe emoji (yes, that exists) have all become more popular during the pandemic.

Some of these emojis and terms might seem flippant, but “I don’t think that by having a little bit of light in the dark, people are making light of the situation”, says McPherson. Lawson agrees: “If you can laugh at them, it makes things more manageable almost, and just helps with people’s psychological health more than anything else.”

Linguists believe that many of the terms currently in vogue won’t endure. The ones with a stronger chance of sticking around post-pandemic are those that describe lasting behavioural changes, such as ‘zoombombing’, which is influenced by ‘photobombing’ and describes the practice of invading someone else’s video call. McPherson reckons that ‘zoombombing’ could become a generic term (like ‘hoovering’ up a mess) even if the company Zoom loses its market dominance.

Ingenuity with vocabulary can also communicate that the current hardships, like many of the coronacoinages, won’t last forever. Olza has taken to referring to the tasks on her ‘corona-agenda’, which can be a subtle way of asking for people’s patience with her temporarily disrupted schedule. Eventually “I will get my usual agenda back,” she says hopefully.

Until then, bring on the quarantinis.

What are the rules of Wales’s circuit breaker coronavirus lockdown?

Do I need to wear a mask if I’m 6 feet away from others?

How much does a hotel’s ventilation system matter right now? We asked the experts.

Biden says coronavirus vaccine must be ‘freely available to everyone’

Former Vice President Joe Biden on Friday outlined his plan to address the coronavirus pandemic, including providing free vaccines to all Americans, as he...
Read more

Chris Christie laments polarization of mask-wearing, says he is ‘lucky to be alive’

Dr. Anthony Fauci is an adviser to President Donald Trump and something of an American folk hero for his steady, calm leadership...
Read more

Why Speaking English May Spread More Coronavirus Than Other Languages

New research suggests that English speakers put more droplets into the air when they talk, which may make them more likely to spread COVID-19....
Read more
Load more

The move could potentially bring relief to the country’s struggling airline and tourism industries, which have lobbied the federal government to ease...
Read more

Governors Are Urging Americans Not To Travel For Thanksgiving

Thanksgiving weekend is normally one of the busiest travel periods of the year. But with Covid-19 infections increasing at a record-setting pace...
Read more
Load more