As many nations cautiously make their way toward relaxing Covid-19 lockdowns, many of us are starting to envision a time when we can stop working at our kitchen tables and return to the office. Yet, in the absence of a vaccine, aspects of modern workplaces will have to change if employees are to safely return to their desks.

Experts suggest this could involve a combination of short-term fixes aimed at boosting worker confidence, reducing the number of staff in the office at any one time and longer-term design upgrades and modifications that put hygiene at the heart of workplace planning.

The first phase of resuming office life will involve making basic changes to keep employees safe and allay fears, says Albert De Plazaola, global strategy director at design firm Unispace. “We may have lived with the flu for many years, but this is the first time our generation has experienced a pandemic. We’re now hyperaware of health risks, whether real or imagined. And employers are hypersensitive about the potential for liability if people get sick at work.”

Yet, with so much uncertainty, it’s unlikely that major refits will be undertaken anytime soon, explains De Plazaola, who is based in San Francisco and has worked with Facebook and Yahoo!. “There’s a flurry of activity, but it’s purely focused on tactical solutions. No one is willing to invest a significant sum on solutions that could be rendered ineffective [by our increased understanding of Covid-19, or a vaccine] in six-months’ time. What you will see is small, targeted hits – almost surgical interventions – that will provide employees with a sense of safety.”

The ‘sneeze guard’ is one such low-cost, high-impact measure. Brent Capron, interior design director at global design practice Perkins and Will in New York, uses the term to describe an additional panel fitted between socially distanced desks. “Previously, workstations were about privacy and acoustics. Now they represent a physical separation between colleagues. Until we hopefully have a vaccine, having that physical barrier will make people feel more comfortable,” he says.

Perhaps unsurprisingly, many are heralding the end of the open-plan workplace and the return of small, private offices. Huddle rooms, for example, could be used as offices until social distancing protocols are relaxed. However, Amanda Stanaway, Sydney-based principal architect of architectural and consulting practice Woods Bagot, says the cellular office plan has “limited benefits for workplace culture and communication”.

Some of her clients, she says, are more interested in the idea of the distributed office. Shunning a crowded central hub for a distributed set of smaller offices that may be closer to where staff live could mean less exposure to infectious diseases like Covid-19 on public transport. “Having small groups of people working collaboratively would address the need for connections and improved mental health, but without risking massive exposure, where one person gets the virus and everyone else has to self-isolate,” she says.

In the short-term, it seems likely that many of us will remain working from home even after government orders to do so are lifted. A staggered workforce may become standard, with smaller groups coming in on alternate days and shifts that avoid transport rush-hour peaks.

“Organisations are working out who most needs to be at the office, and capping staff numbers off at about 30%, which is probably the sweet spot for social distancing,” says De Plazaola. For starters, he foresees firms subsidising home offices, given the home is now considered a legitimate workspace. This is something that could potentially allay concerns about health impacts from ergonomically inadequate set-ups.

Stanaway says a shift to home working could “liberate” parts of the workforce such as working mothers and those who live far from major cities and have struggled to find work. But she believes commentary about the office becoming redundant is overblown. “Yes, most people work to earn money, but we also work because we enjoy coming together to create ideas and solve problems. I think that’s what we’ve been missing these past few weeks. That sense of connection is fundamental to the human race.”

In the longer term, experts predict that society’s heightened awareness of contagious diseases could usher in a new type of office – one that has elements in common with a hospital.

Capron, who has designed office buildings for hospitals and worked with healthcare interior teams, is now applying that knowledge to designing office spaces. “One of the guiding principles is choosing materials that can withstand heavy cleaning using caustic products. You’ll see porous surfaces like natural oiled wood avoided, with a preference for stone or laminates,” he says. He also expects to see solution-dyed carpets with moisture-barrier backing used, because they can withstand heavy shampooing.

These more durable materials are not necessarily costlier than the more familiar alternatives. This is important, because in these straitened economic times, few organisations will have a budget for an expensive refit. “The cost difference is not great – it’s more about mindfully choosing between A and B,” says Capron. “I also think tenants will demand more from their landlords in terms of more regular cleaning.”

He also expects to hear more discussion about air filtration systems that use ultra-violet light. “Even though a UV system isn’t something that you should have out in the open – they tend to be hidden back in the ductwork – companies may look at heavy UV cleaning when everyone has gone home to make sure that the air is as clean as we can get it.”

Another feature of hospitals that is likely to become an office staple is sinks: expect reception and common areas to be fitted out with them. “I love the idea of handwashing becoming a new ritual when you enter an office or a public space,” says Capron.

He also expects office layouts to change, with circuitous routes eliminated. “Doctors’ work is so urgent and their time is so precious that they will find the fastest way to get from point A to point B. We, too, will be more focused on getting from A to B in a very direct manner, and conscious of what we’re touching along the way.”

Another concept that may emerge is the ‘contactless office’ – something experts predict could become widespread among organisations who can afford it.

For example, employees could eliminate the need to press communal buttons by using their smartphone to send a command to the elevator or staff coffee machine (in fact, Perkins and Will have such a coffee machine in their new office). Conference rooms could be fitted out with voice-activated technologies to control lighting, audio and visual equipment. Passing through doors or flushing the toilet would require a simple wave, while self-service in office kitchens could become a relic of the past, to be replaced with automation or a dedicated server. 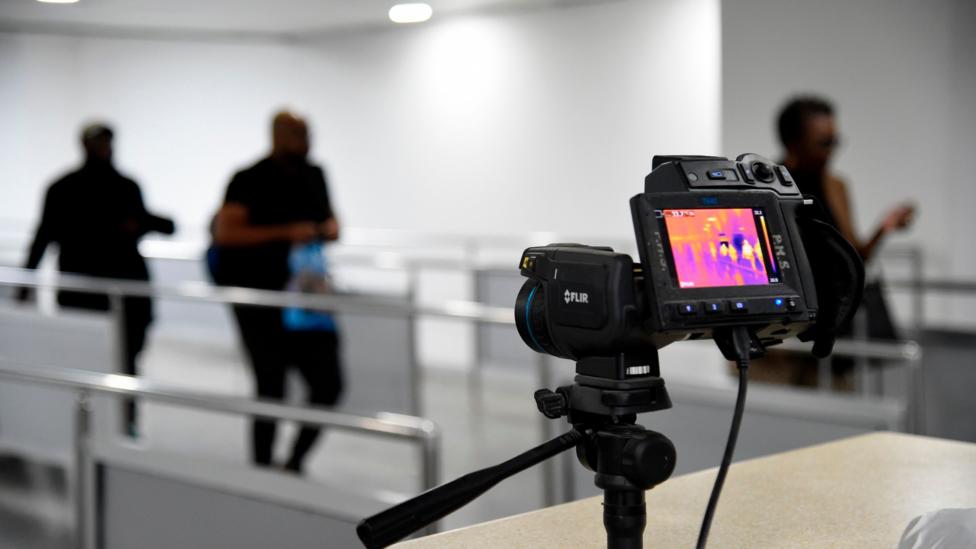 Thermal scanners have been used in airports – but would deploying similar technology in workplaces spark privacy concerns?

There’s also the idea that companies could more aggressively monitor for sick employees. One possibility is embedding sensors underneath desks to monitor body temperatures, with a facilities manager alerted when someone has a fever. “This kind of technology already exists and wouldn’t be tough to integrate,” says De Plazaola. “But it raises huge privacy issues. HR and legal departments would need to weigh in on whether this is the right course to pursue.”

Some organisations have already introduced somewhat similar measures. Sydney-based wholesale IT equipment distributor Dicker Data brought in staggered shifts for essential onsite workers, giant sanitising stations and extra cleaners. They’ve also invested AUD$10,000 (USD$6,470, £5,258) in a body thermal scanner, which beeps if anyone has a temperature while standing in front of it. The warehouse manager is responsible for assessing whether the staff member looks sick and should be sent home.

“There were a couple of instances when we did ask staff to go home. And I think that gave our staff a sense of safety,” says Mary Stojcevski, the company’s chief financial officer. No objections were raised to using the thermal scanner, she adds, and when the company’s new office building is completed in October, all 400 staff plus visitors will pass through it.

Aodhan MacCathmhaoil believes that self-regulation is preferable. The founder of Sydney-based garbage company Waster is currently looking for new office premises and although he has a long list of safety requirements, he will not contemplate temperature checks. “I think the negative aspects would outweigh the benefits. Morale would suffer if people felt that they were being policed. Should I know about my employees’ health? It’s definitely a grey area. I’m not a medical professional, so I wouldn’t know how to interpret the data anyway.”

Whatever happens in the months ahead, and even if a Covid-19 vaccine becomes available, it seems likely that the experience of living through a pandemic will have a long-lasting impact on the way we work and how our workplaces function. If nothing else, the idea of coming to work while sick could become socially unacceptable. On the other end of the spectrum is a focus on health and hygiene so pronounced that it gives new meaning to the idea of working in a sterile environment.

Who needs a suitcase with nowhere to go? Luggage firms nosedive

Coronavirus cases in Wales: How many people have died?

LONDON — People across almost all the world's leading rich economies have turned more skeptical about their governments' handling of the coronavirus pandemic...
Read more

White House will be having an economic summit in June

It became clear to the White House late last week that convening an in-person G7 economic summit on US soil would likely...
Read more

With prior disease outbreaks, there’s typically been a prominent scientist who becomes the “public face.” That involves regular briefings with the press to...
Read more
Load more

Iran recorded 2,483 new cases from the past 24 hours, the country's Health Ministry said Sunday. This brought the total to 58,226 confirmed...
Read more

Expert consensus on comprehensive treatment of coronavirus disease in Shanghai 2019

Source: Weixin On March 1st, the Chinese Journal of Infectious Diseases, which was hosted by the Shanghai Medical Association,...
Read more
Load more

Who needs a suitcase with nowhere to go? Luggage firms nosedive

Samsonite and Rimowa are in crisis, venerable brand Antler in administration. Firms should switch to making bags for cars or bikes, and...
Read more

‘Very few people have ever been to Angkor alone,’ says a Cambodia-based expat who took advantage of the lack of foreign visitors...
Read more

China's Ministry of Culture and Tourism has advised the public to avoid traveling to Austrlia, citing racial discrimination and violence against the...
Read more
Load more