Some airlines are planning to fly with middle seats empty to help passengers social distance. But will it work – and can they afford it?

As more countries mull lifting Covid-19 lockdowns, airlines are examining what flying might look like as travel restrictions start to be relaxed. Carriers are haemorrhaging money and it’s very much in their interests to get planes back in the air. Passenger confidence will be one of many hurdles to overcome, however, with many worried about keeping a reasonable distance from their fellow travellers.

Several airlines are exploring the idea of keeping middle seats empty, to avoid passengers sitting directly beside each other. European short-haul carrier EasyJet was the latest airline to float the idea, with chief executive Johan Lundgren describing it last week as “something that the customers would like to see”. Other airlines that have mooted similar plans include Alaska Airlines and European budget carrier Wizz Air.

Removing the unloved middle seat option would lead to a hearty hooray from the travelling public. Sit by the window and you get a view, plus a bulkhead to snooze against. In an aisle seat, you can pop to the toilet or stretch whenever you like. The middle seat has no such benefits, unless you’re one of those people who strikes up conversations with their seatmates.

But would blocking middle seats actually help us maintain proper social distancing and if so, how long could airlines keep doing it? Is it a realistic option beyond the very short term? 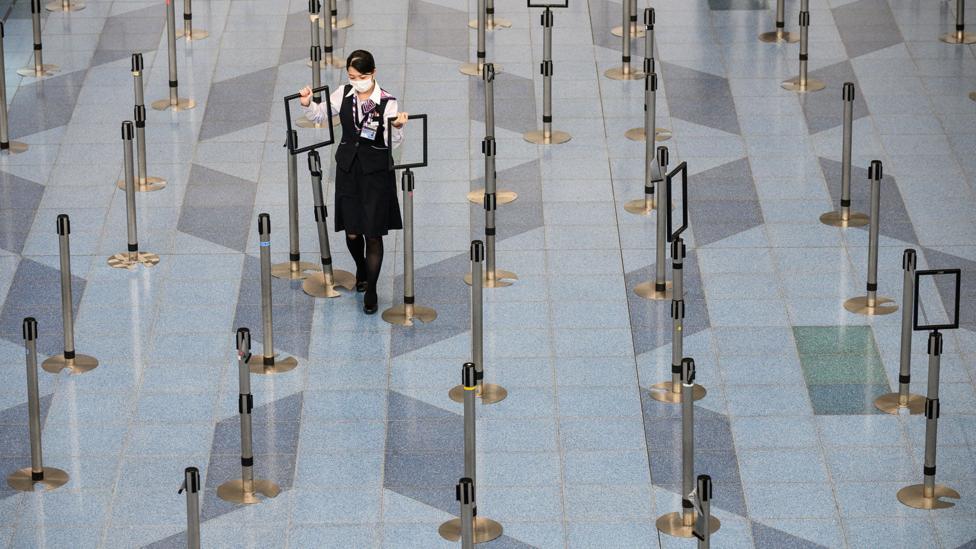 Tokyo’s Haneda Airport in March as the coronavirus spread across the globe (Credit: Getty Images)

“Right now, we need it, because not doing so would contradict instructions from authorities and common sense. The urgent need to slow infection rates takes precedence overall, even if the solution is not perfect,” explains Daniel Baron, managing director of Tokyo-based LIFT Aero Design, which helps airlines design cabins and customer experience. “Long term, however, it is not economically sustainable. After the dust settles, we will all go back to expecting affordable global mobility again. To enable the fares for that, especially if total capacity has been reduced, airlines will need bums in all seats.”

Planes are very much not set up for social distancing – entirely the opposite. Billions of dollars have been spent in recent years in particular to fit as many people as possible into smaller spaces. For example, when the big wide-body, twin-aisle, twin-engine Boeing 777 started flying in the 1990s, most of them had nine seats per economy row on long-haul flights. Today, almost all airlines flying the plane – whether long-haul with the likes of Emirates or short-haul within Japan – have 10 seats, meaning narrower seats and narrower aisles.

After the dust settles, we will all go back to expecting affordable global mobility again – Daniel Baron

Responsible social distancing in the age of Covid-19 means staying at least 2m (6ft) from other people. But that’s impossible on a modern plane, where seats are around 45cm (17-18 inches) wide, so leaving the middle seat free only keeps you 45cm from your neighbour, side to side. You’d need to be more than four seats apart to keep 2m away. In other words, about as far away as the two window seats in any row of six seats separated by a single aisle. (We’re ignoring, for simplicity’s sake, any travel by passengers or crew up and down the aisle.)

That’s side to side. Forwards and backwards, airline seats are spaced in rows around 75-80cm (29-32 inches or so) apart. So, if we wanted to keep people at least 2m apart, that would mean leaving two full rows free between each passenger. What that means is seating four passengers every 26 seats, which translates in percentage form to filling just 15% of seats. That’s what airlines call “load factor”.

Fundamentally, airlines need to operate at least at break-even

The load factor – in essence, the percentage of seats on a plane occupied by passengers – determines whether flights break even and are worth operating. At a certain load factor, flights become profitable, and the difference between making a loss or not on a route turns on just a few passengers. In 2019, the International Air Transport Association cited an average global load factor of 84%, regionally ranging from 89% in North America to 71% in Africa. 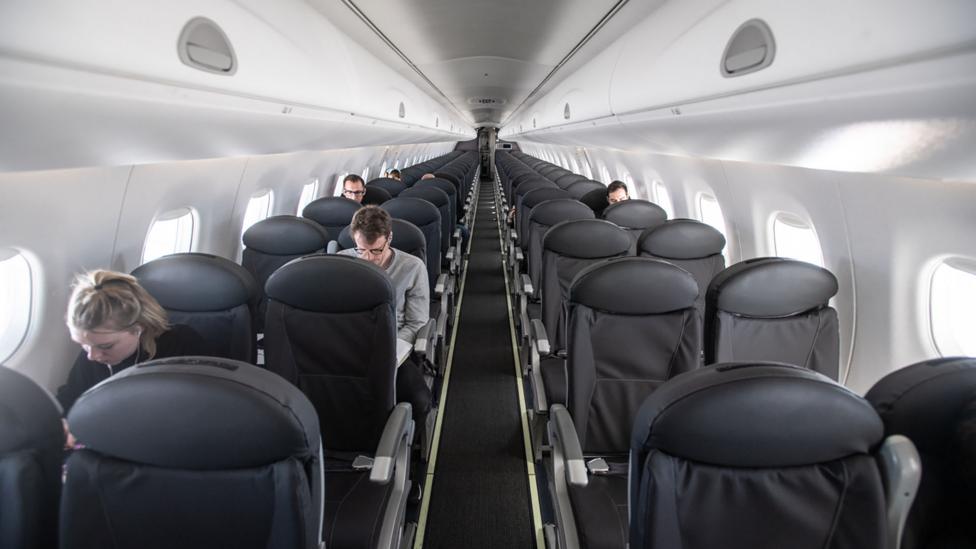 An almost empty flight from Milan to London in March. Some airlines are moving to keep at least middle seats empty in aircraft that have them (Credit: Getty Images)

Blocking out middle seats on a Boeing 737 or Airbus A320, which are usually in a 3-3 layout – and even some larger planes like a Boeing 787 or Airbus A350, which tend toward a 3-3-3 configuration – would mean a maximum load factor of 66.7%. That’s simply not enough to allow airlines to operate without making losses.

Yet Jason Rabinowitz, head of catalogued data at Airline Tariff Publishing Company, an airline-owned company that provides pricing data, points out that current demand makes it a viable stopgap – for the moment. “As long as airline load factors remain low, airlines will be able to continue blocking middle seats without any issues. Flights that are still operating today are doing so with load factors so low that there simply isn’t a need to occupy middle seats,” he explains.

When we do start flying again, don’t be surprised if your seat assignments end up being changed

Those flights still operating are, by and large, because governments have asked for them in order to move the essential minimum of people and cargo during lockdown periods.

But the current situation cannot continue forever. Unless government regulation changes, social distancing is mandated and some way to bridge the resulting revenue gap for airlines is found, “as the industry begins to recover and operate flights on a somewhat normal schedule, airlines will eventually have no choice but to unblock middle seats as load factors increase”, Rabinowitz says. “Moving forward, airlines will likely have to be a bit more heavy-handed in evenly spacing passengers on board, moving seat assignments to facilitate as much social distancing as possible.”

So, when we do start flying again, don’t be surprised if your seat assignments end up being changed.

Distance is just one of a package of measures

Not all airlines are advocating the middle seat approach. Ryanair’s Michael O’Leary questions the effectiveness of adding just 45cm of separation, especially if passengers aren’t separated adequately on the ground. 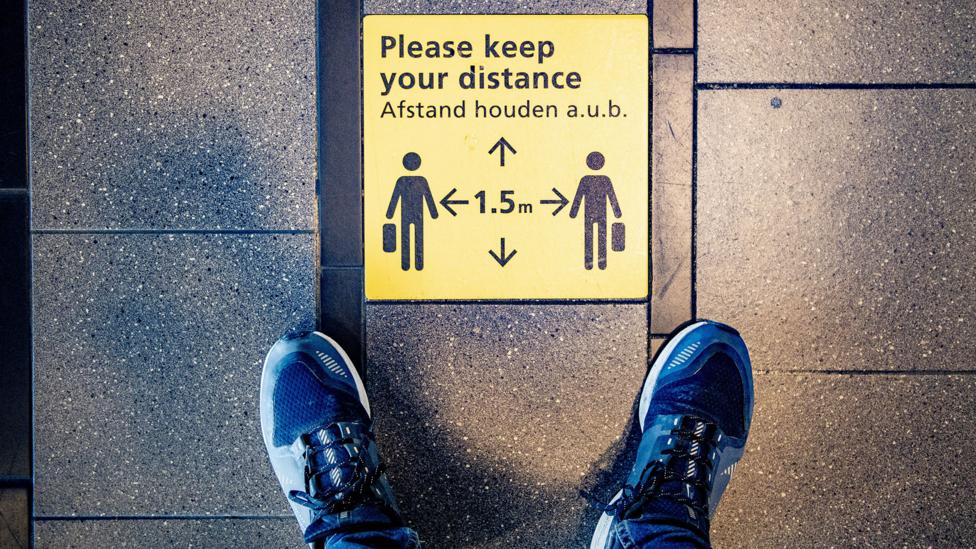 LIFT Aero Design’s Daniel Baron points out that there are a number of other measures that airlines can use to try and make travel safer. “Let’s not forget that cabin air circulation is on par with operating theatres,” he says. “A combination of pre-flight screening, thorough cabin sanitising, smart seat assignments and masks will likely be the way forward in the short to medium term.”

Other ideas will come to the fore as well: Delta Air Lines has changed the way it boards aircraft, and is now boarding them strictly from the rear to the front, so passengers sitting at the back don’t have to pass those sitting at the front. The airline is also boarding fewer people at a time to improve physical distancing of passengers.

Many airlines are also cancelling or reducing inflight food and beverage service to reduce interactions on board: Southwest is serving individual cans of water rather than its usual full drinks round, for example. Some airlines are offering to-go bags in the gate area instead.

Covid-19 has already changed our world in multiple ways, and will continue to do so as we apply the best of human ingenuity to fighting it. For those of us who need to travel while we do so, and for those of us fortunate enough to travel afterwards, the way we do will be changed too.

Can Aspirin Reduce Risk Of Death From Covid-19 Coronavirus?

What’s better in the pandemic: Public transportation or ride share?

How To Vote Safely With The Covid-19 Coronavirus Pandemic

You may have seen those T-shirts that say, “Vote like your life depends on it.” Well, perhaps you aren’t in the habit...
Read more

Trump says ‘not’ giving up on coronavirus fight

US President Donald Trump denied Monday that he is giving up on fighting the spread of the coronavirus, insisting, despite a new...
Read more

With the COVID-19 virus moving through the ranks around him, Vice President Mike Pence appeared at Range Regional Airport in Hibbing, Minn.,...
Read more
Load more

Dr. Anthony Fauci is an adviser to President Donald Trump and something of an American folk hero for his steady, calm leadership...
Read more

Why Speaking English May Spread More Coronavirus Than Other Languages

New research suggests that English speakers put more droplets into the air when they talk, which may make them more likely to spread COVID-19....
Read more
Load more

Delta, United and Alaska Airlines have banned more than 900 passengers for not wearing masks

With airlines imposing mandatory mask requirements on flights amid the coronavirus pandemic, many unhappy passengers have made headlines for being removed from flights for...
Read more

The move could potentially bring relief to the country’s struggling airline and tourism industries, which have lobbied the federal government to ease...
Read more
Load more